A place steeped in history

The history of the Maison des Planchettes

Some history notes on the great Séminaire de Saint-Flour from its origins to the present day … These few history notes are intended for all of you, tourists, travelers, speakers, delegates, priests in search of fresh air and calm conducive to contemplation, curious no doubt to get to know better the vast and pleasant building which accommodates you and which was for three centuries the Grand Séminaire de Saint-Flour.

The Foundation of the Major Seminary of Saint-Flour

The diocese of Saint-flour was created in 1317 by Pope John XXII, by dismantling that of Clermont considered too extensive. But more than 300 years passed before the training of priests was carried out in a major seminary.
Until the 17th century, the preparation of the clergy left much to be desired: if the religious orders trained their future members in their monastic schools and their universities, if the high clergy of Auvergne, recruited from the nobility and the bourgeoisie, prepared by following the “grammar” and theology courses in the universities of Montpellier, Toulouse or Paris, the country priests received rudimentary training from parish priests who taught them some elements of Latin and theology and instilled in them elementary notions liturgy, in short what is strictly necessary to say mass, confess, baptize, bury their flock, keep the accounts of their church, they then underwent a summary examination before the archdeacon and were given orders in their parish by the bishop during his pastoral tour. Very numerous, these priests did not all obtain a curial title and then formed a community of “godchild priests” or “priests of the table” often lived with their families, did not report to any immediate superior and shared the founders’ income. and hats for which they provided services.
It was not until 1563 that the Council of Trent, aware of the shortcomings, errors and abuses inherent in this deficient system, made an obligation “on all churches, cathedrals, that is to say on bishops and chapters, to ‘to ensure in a permanent way the recruitment of the clergy for the whole diocese by the foundation near the church of a special college or seminary “. Yet this much needed institution did not really come into practice until a hundred years later. Jacques de Montrouge, bishop of Saint-Flour (1647-1664), founded the seminary at the end of 1650 or at the beginning of 1651, with the help of the Sulpicians, MM. Eymère and Planat, specialists in the field.

The Royal Seminary of "The Hermitage of Notre Dame"

It first bore this name because it had been recognized in 1653 by letters patent of King Louis XIV and that it was located next to a small oratory dedicated to the Blessed Virgin and called “the hermitage of Notre-Dame” . The first house therefore occupied roughly the site of the current chapel, at the corner formed by the meeting of rue des Planchettes and rue du Tuile, a place remarkable for its southern exposure, sheltered from “ecirs”. “, on the edge of the only main access road to the city and in front of the famous” Hôtel de la Couronne “where, according to tradition, CharlesVII would have stopped in 1437 before crossing the Porte du Tuile gate. The foundations and plinths of the original house, enlarged a few years later, can still be seen in the vacant lot east of the apse and the chapel, as well as the two doors opening onto the street. The management was entrusted to two priests of the diocese: Canon Delors and M. Crozat.
Jacques de Montrouge, transferred in 1664 to the bishopric of Rodez, died that year, not without having bequeathed his 565 books to the direction of the seminary and all the works in the library.

The Direction of the Seminar entrusted to the Vincentians

From 1674, the new bishop, Hierosme de la Mothe Houdancourt (1664-1693), preferred to entrust the direction of the Seminary to the Lazarist Fathers. By deed of January 30, confirmed in September by letters patent from the King, he granted it to them and ordered “that in the future any person aspiring to orders, of whatever quality, will retire to the said place of the Seminary. to be instructed in the things necessary for a vocation, without being able to take any ordination except by this way “
M. Nicolas Pierron, the first Lazarist superior, arrived in Saint-Flour in February 1674, with two priests and two brothers from the Congregation of the Mission. These new directors settled in the original Seminary, east of the present chapel, along the rue du Tuile-Haut and endeavored to adapt it to its new destination.

The Seminar at the end of the XVIIth Century

The income of 1,200 pounds, imposed on the profits of the diocese, proved insufficient to improve and furnish the building. In 1673, two generous vicars general, MM. Chomel and Pastour, made important donations in his favor: the first offered him 15,000 pounds plus an annual annuity of 2,383 pounds throughout his life; the second, 500 pounds of annuity constituted on the Seminary of Saint-Charles des Lazaristes. Gathered by the Bishop, the assembly of the clergy of Saint-Flour voted a contribution on June 5, 1675. On March 23, 1678, Monsignor de la Mothe Houdancourt united the simple priory of Talizat to the seminary for “the maintenance of the house and of the church of said Seminary “, with annual revenues estimated at 3,000 pounds 1689. For nearly 80 years (1691 to 1760) the rule for the training of priests did not vary: tonsure at the age of 12, two in philosophy in a college, six-month stay at the Seminary as externs for candidates for the sub-diaconate aged at least 23 and preparation for ordinations.
Under the long episcopate of Monsignor d’Estaing (1693-1742) the second superior, Claude Mourguet, bought the Coutel house for the sum of 500 livres, “comparing the house and court of the said seminary from the East and the South”. The corner building where the remarkable library is housed will be built on this site later.

A great benefactor of the city, Monsignor Paul de Ribeyre did not fail to take an interest in his Seminary, which he wanted to be larger, more open and more airy. He gave 50,000 pounds which was added to the 50,000 pounds offered by the superior of the Lazarists, Mr. Antoine Magninet, to buy the gardens, meadows and houses included in the quadrilateral formed by the junction of the rue du Tuile, the rue des Planchettes, the chemin de Fridières and the alley connecting the latter to the rue des Planchettes which disappeared during the 19th century, and to build the current monumental house on the model of that of Saint-Lazare in Paris. The work lasted from 1752 to 1762. The cut stones came from the quarries of Bouzentès, Murat. Wells and four cisterns ensured the water supply. West of the central building, the concierge and the outbuildings are being built with a porte-cochère. The chapel, nestled between the Seminary and the houses in rue du Tuile-Haut, was consecrated in 1762 by the bishop who had paid 15,000 pounds for its erection. The magnificent building was completed and, on the west facade of the chapel, in white marble, on that of the entrance door in the lava of Auvergne, the Prelate had his arms engraved:

Azure with a wavy silver fess
accompanied by three canes of the same,
pecked and hung mouth,
two in chiefs and one in point.

The synodal statutes of Monsignor de Ribeyre improved the training of the clergy and transformed the old discipline of the Seminary: the young tonsuré had to be at least 14 years old and to have provided a certificate of aptitude to the ecclesiastical state issued by his parish priest; two years of theology at the college, sanctioned by examinations, were required to access the sub-diaconate; nine and a half months of seminary internship and several retreats preceded the ordination of the new priests.

Following the directives of their bishop, Monsignor de Ruffo, professors and seminarians, numbering 80 to 100, all refused to take the oath of office in the Civil Constitution of the Clergy. On January 23, 1791, they had to empty the premises. The establishment successively became the Seminary of the constitutional bishop Thibault, deposit of saltpeter and powder, central school of the department.
An expertise of the disaffected Grand Séminaire, carried out on 15 Floréal Year IV, is the most evocative document of its state at the time of the Revolution. The distribution of the different rooms has hardly changed since: to the left of the porte cochère, a common place, a small stable, a hayloft and a storeroom; on the right, the porter’s lodge adjoining a large shed; on the ground floor of the three-storey building, a vestibule, a grand staircase, two large vaulted rooms, two kitchens with their outbuildings, a bakery …; on the first, two fore-rooms and twenty-eight rooms served by a corridor; in the second, another corridor, as many rooms, two libraries, a parlor and common place; in the third, another corridor, thirty-two rooms, a common place and “bled” attics. Behind, a courtyard and a “church”; in front of a large courtyard, three terraced gardens and a dovecote. All in very good condition, valued by experts at 100,000 francs.

The Major Seminary in the XIXth Century

An imperial decree of February 1, 1803 placed the buildings at the disposal of Monsignor Belmont, Bishop of Saint-Flour. The Seminary was led in turn by the Sulpicians (18036-1811), by a staff of diocesan priests (1811-1815), again by the Sulpicians (1815-1820), and finally by the Lazarists (1820-1903) recalled by Monsignor of Salamon.
These latter gave to the Seminary of eminent masters, to Cantal an educated clergy, to the country of bishops and even two saints: Saint Jean Gabriel Perboyre and Blessed Berthieu.

From 1903, a new storm shook the Seminary. The Vincentians had to leave and were replaced by six priests from the diocese, including MM. Saliège, future Cardinal-Archbishop of Toulouse, and Brunhes, later bishop of Montpellier. Then, under the law of separation of 1906, on Saturday December 15, an order was given to the directors and seminarians to evacuate the premises. For seven years, the “theological school” settled down in the Missionaries house, Montée des Roches. The municipality debated for a long time to decide whether to sell the Grand Séminaire or transform it into a hospital or barracks. Finally, on May 29, 1913, at the sub-prefecture, the buildings were auctioned and acquired by Mr. Chanoine Fleuret, a native of Cantal and Curé of St-Philippe-du-Roule, for the sum of 48,000 francs. He immediately handed them over to Monsignor Lecoeur who returned them to their original destination. The life of the seminarians resumed, disturbed by two wars and social upheavals, the Major Seminary was even requisitioned in June 1944 by German troops.

Sometimes shaken, but never crushed by the vicissitudes of life, the Major Seminary had to succumb to the most unpredictable of dangers: the drying up of priestly vocations.

1959: the door was closed on the heels of the last seminarians who would henceforth prepare for the priesthood in the premises of the Clermont seminary.

What was to be done with these vast buildings, rightly considered to be among the oldest and most remarkable of the episcopal city?

To save them from ruin, this set had to be made profitable. Transformed into a reception house, these buildings now allow you to benefit from their facilities, while participating in a work of safeguard. So they say “thank you” and promise you a pleasant stay. 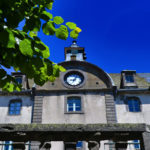 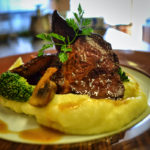